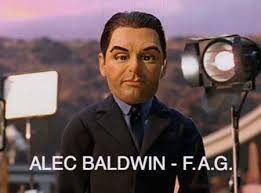 Alec Baldwin, interviewed in a long piece for an obscure website, announces his departure from public life. He is moving to LA, like all other people who loathe publicity and want to live in privacy.

He is angry at the “Gay Department of Justice” for treating him the same way they would a Republican who used ghey slurs instead of giving him the pass he is entitled to as a left-wing progressive. So, like a comment troll who’s been challenged to provide links to Sarah Palin saying she could see Russia from her house, or where in the United States Constitution are listed the budget priorities Congress must fund… , he has flounced off and swore that he won’t be back because his critics are just too mean.

Also, Re: Mr. Piers Morgan, good riddance to bad rubbish. Ponder the irony of a Brit trying to take a former colony’s guns.

BTW: Have you heard about the racist hatemonger who referred to African-Americans as “mongrel people?”