Eric Cantor’s Democrat opponent wants you to know that George Bush and Dick Cheney were behind the terrorist attacks on 9-11-2001 and that FoxNews covered .

Using the Todd Akin guilt-by-association method, we can conclude from this that all Democrats are whackjob 9-11 truthers. [Then again, they are the party that elected Alan Grayson, Sheila Jackson Lee, Liz Warren, and Fortney Stark.]

Also, he wants you to know that if you think it was wrong that four Americans were murdered by terrorists in Benghazi and the president lied about it, you’re mentally ill. 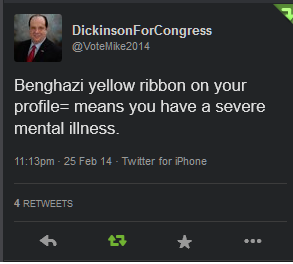