Last week, President Obama released his new budget proposal, which in February he said would be the end of austerity. First let’s ask, what is meant by “austerity”? As a policy, was it ever tried?

As discussed by myself and others, “austerity” means tax hikes (not spending cuts) in practice. Lefties hurl the word “austerity” to demonize the idea of spending cuts. But few of the countries which left-liberals accused of cruel austerity in the last few years cut their overall government spending levels; the majority continued to increase spending. So spending cuts can’t explain those countries’ poor economic results. What can? Well, most of them raised taxes.

Clearly, we should end (or reverse) the tax hikes. That would be a great “end of austerity”. But Obama’s meaning is that we should undertake spending increases; which, for reasons touched on below, probably mean deficit increases.

Before going into Obama’s proposal, let’s review the current state of the U.S. budget.

Calafia Beach Pundit has a chart where we can see that overall U.S. federal spending has roughly held at its (ultra-high) 2009-2010 levels, while tax revenues have recovered from their 2009 trough: 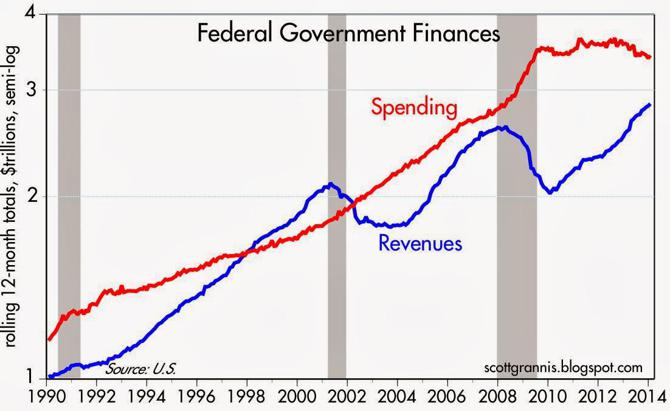 The result is a federal deficit that is down by more than half from its Republic-destroying heights of four years ago – although in this next chart, we see that the deficit is still as bad as Bush 43’s absolute worst deficit: 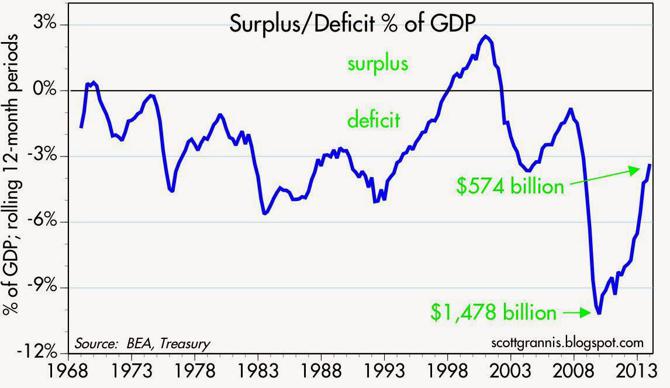 We got here despite (not because of) Obama’s economic policies. As I’ve noted before, government spending hurts the economy. So does Quantitative Easing. So do Obama’s tax hikes, and Obama’s massive expansions to the Regulatory State (not only Obamacare).

All of these policies burden the economy (rather than assisting it), which explains why the last few years of economic “recovery” have been so terribly sluggish, resulting in a Recovery for the One Percent while mainstream America suffers historic worker discouragement and mass departures from the labor force.

The deficit reduction itself is a very shaky achievement. Recall that, just in the last five years, Obama has run up the public debt by over $6 trillion and counting. The $17+ trillion U.S. debt is now a financial bomb waiting to go off. Here’s why.

The only reason we can afford our debts (public or private) today is because of the Federal Reserve’s ZIRP (Zero Interest Rate Policy). It keeps everyone’s interest costs down, including the government’s. But it is an absurd policy, an historic anomaly. Interest rates will rise sooner or later. That will explode everyone’s interest costs, including the government’s.

Even the rosy-minded CBO projects government interest spending to double as rates normalize over the next decade, adding a built-in extra $200-300B annually to federal spending. I’ve seen other estimates that are rather worse. And another recession (falling tax revenues) could easily take us back to trillion-dollar deficits again, making the debt even worse.

Obama has one last chance to fix this. While continuing to postpone Obamacare for the good of America, he must (1) cut spending (including entitlements) and (2) flatten the tax code (lowering marginal tax rates, a real economic stimulus). He must do it now, so that the federal budget shift into surplus, and begins to pay down his debt while our times are (relatively) good-ish.

During the last few years of Tea Party-imposed spending moderation, Democrats suggested it would cause the sky to fall on the economy. That didn’t happen. That means the economy could handle some actual spending cuts, especially if combined with entitlement and tax reform.

And that brings us to last week’s budget news. Obama proposes to increase spending to $3.9 trillion, with a few more tax hikes (again, the real “austerity”). That is the exact wrong direction to go in. Obama is blowing his last chance to fix his Debt Bomb.

Obama’s proposal outlines a future budget path that is delusional, because it it makes economic assumptions that even the rosy-minded CBO finds far too rosy. Future deficits, says the CBO, will be rather larger than Obama projects.

All of this proves that for left-liberals, it is never the right time to make the slightest government spending cuts. Never, ever.