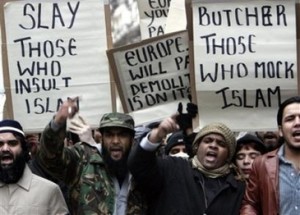 “The charge of criminal and moral negligence ought to extend to all activities of the climate deniers who receive funding as part of a sustained campaign to undermine the public’s understanding of scientific consensus.”

Torcello cites as precedent the criminal prosecution of six scientists in Italy for failing to predict an earthquake. A Libertarian or a Conservative looks at such prosecutions as a cautionary example of what tyranny and dogma lead to; to a progressive leftist, they are apparently a template. Both radical Islamists and Progressive Global Warmists share a common belief that it is dangerous to allow people to think for themselves.

On a related note, the press has been effectively banned from covering Michelle Obama’s Tour of China next week. The White House also refuses to divulge how many millions and millions of taxpayer dollars will be spent on Her Majesty’s latest Lux Vacation.

Update: A BBC Program ironically titled “Free Speech” chose to cut-off discussion on the question “When will it be all right to be Muslim and gay?” ostensibly so as to not give offense to Muslims (Bad Enough); in reality, an honest Muslim answer would have exposed their intolerance and belligerence toward gays; which progressives are in complete denial about (Worse).