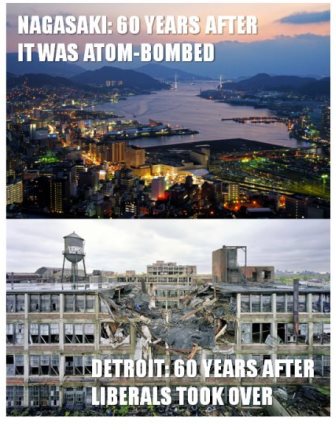 The bankrupt city of Detroit has been run since before most of us were born by a series of very left, progressive, Democrat mayors. Most of this time, the city council and mayor’s office were run by African-American Democrats who pursued policies of taxing those who earned more in the name of fairness, labor union empowerment, racial favoritism in hiring and Government contracting, and crony relatioships between Government and favored business interests. Critics of these policies were called racists; that they wanted to see a black man fail because of their hate. They were also called “anti-worker,” said to be pawns of “Big Business.” As the city decline, its leadership blamed its problems on Republicans, who by that time were long out of power and in any case offered little opposition to the city’s progressive Democrat leadership.

Does any of that sound familiar at all?

The city declared bankruptcy last year, and for most low-information voters, that was the end of it. They went back to following the Cardassians on their Obamaphones, or whatever. However, Detroit is still providing us with regular cautionary examples of the failure of Socialism.  Just this past week:

It’s a testament to human stupidity that no matter how many times socialism fails, there are always those eager to give it another shot.

Venezuela is another place where Socialism has succeeded brilliantly in its goal of leveling out income disparities by forcing  everyone but a few elite party officials into grinding poverty. Not only are people forced to wait in line for hours to purchase limited amounts of food, they are also being marked, Book of Revelations style, in order to be able to get food. 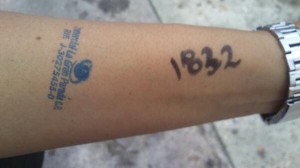 According to a source familiar with what’s going on, this number-scribbling takes place outside large cities like Caracas, and it doesn’t happen in private supermarkets. However, private supermarkets can set a limit to the number of items a person can buy. For example: You can only pick up 4 liters of milk, 2 liters of oil, 2 kilos of sugar etc.

And that’s if the market even has those items.

It is said that under socialism, people line up for loaves of bread. Under capitalism, loaves of bread are lined up for people. Venezuela proves… this isn’t just a metaphor. 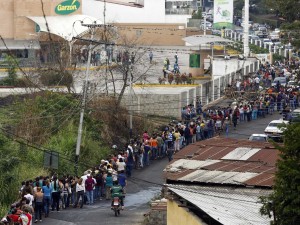