Why do the Militant Atheist Theophobes feel compelled to ruin every Christian holiday? There is definitely more going on here than simply not being convinced of the existence of a deity. There are plenty of things I don’t believe in … unicorns, leprechauns, vampires, the ObamaCare enrollment figures  … but I don’t make a fetish of constantly and loudly reminding people that I don’t believe in them. (Except for that last one, and it’s more a hobby than a fetish). Nor do I feel compelled to attack obsessively those who do. (Ditto).

So, anyway, the intolerant Theophobes at the Freedom From Religion Foundation insisted on posting this sign during Easter Week in the State Capitol of Wisconsin; because the thought of Christians celebrating a very important holiday without anti-Christians jeering at them was just… intolerable. 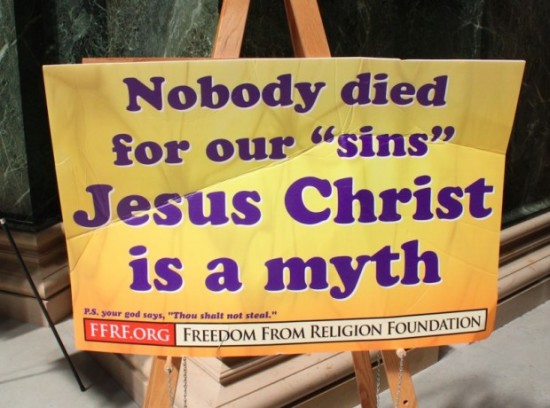 As some very wise guys once said, “Logic and reason aren’t enough: You also have to be a dick to everyone who doesn’t think like you.”