Fanatical Abortion Supporter Wendy Davis is lagging in all the polls in her race for Texas Governor. So, the Democrats and their allies have decided to accuse her opponent of being pro-rape. 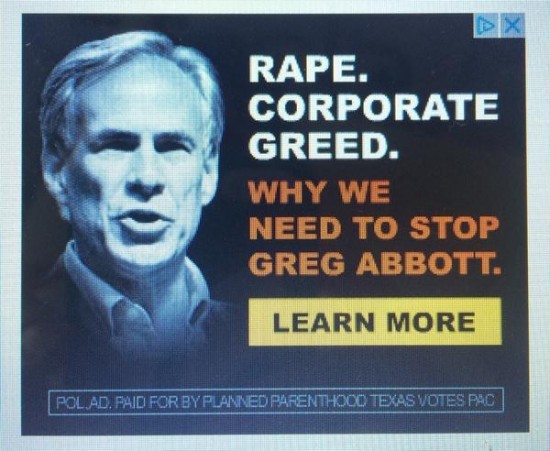 The backstory is, her opponent, Gregg Abbott, was once a justice on the Texas Supreme Court, who offered a dissenting opinion in a case that involved rape. A woman was raped by a traveling salesman. Rather than sur the rapists employer for hiring a sex offender, she wanted to go after the deeper pockets of the company that subcontracted the company the rapist worked for. Abbott’s opinion was that it was lawful for her to sue the rapist’s direct employer, but not the larger corporation that contracted out to his employer.

In other words, Gregg Abbott thinks rape is okay.

Meanwhile, the Democrats revere Bill Clinton who was credibly accused of rape by Juanita Broaddrick.

The Democrats quite literally have nothing to offer except free [stuff] from the Government, and deranged allegations that their opponents are racists who support rape.

And sadly, the country has become such an Idiocracy that the strategy works.