Chicago isn’t Detroit yet, but, gosh darn it, they’re trying. The president of the Chicago Teacher’s Union is considering a run for mayor, and according to polls, she would probably win.

The current mayor of Chicago, Rahm Emanuel, is a standard issue corrupt Chicago Democrat; Lewis is a straight-up radical. Lewis’s main beef with him is that, in response to the fact that the population of Chicago is declining, and the population of school-age children in Chicago is declining even more, Emanuel closed a bunch of unnecessary public schools; and of course that meant layoffs for teachers and administrators, and that meant fewer dues-payers to support Ms. Lewis’s quarter-million-dollar annual Teacher’s Union president salary.

And the average salary for a Chicago Public School teacher was $76,000 per year in 2012 when teachers went on strike to demand more money, which was not only the highest in the country, but $3000 more than teachers in New York City. 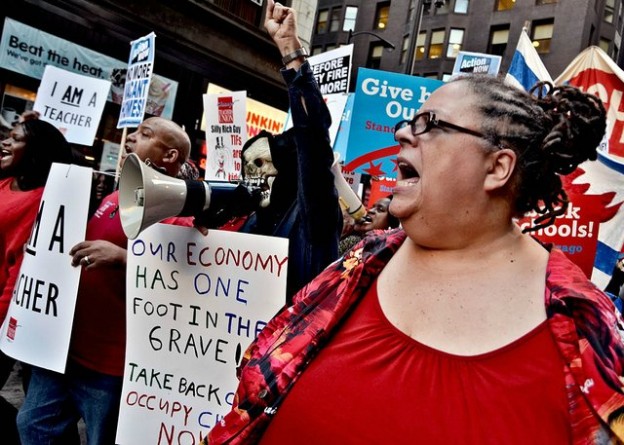 She also obviously has not been participating in Michelle Obama’s school lunch program.