In covering the People’s Climate Change March this past week, the MFM were very, very careful to make sure that none of their coverage covered people and groups like this (even though their numbers dominated the marches): 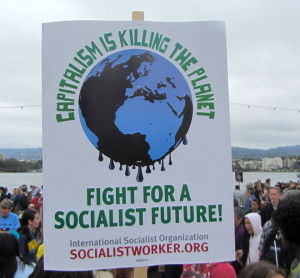 One man wants to burn down the houses of those who won’t bow to his agenda saying “All these people have names and addresses. Like, every person fucking us over, we know where they live, and we could go there and burn their houses down. I mean, look, you wanna fucking ruin my environment and ruin my home, I’ll come to your home and ruin yours.”

The real ironic part about the environmentalist embrace of communism is how much environmental devastation was wrought by communists in the last century. To cite but one example, while seventies-era progressives were cheering for the victory of Soviet Communism; Soviet Communism was hunting whales to extinction.

It was one of the fastest decimations of an animal population in world history—and it had happened almost entirely in secret. The Soviet Union was a party to the International Convention for the Regulation of Whaling, a 1946 treaty that limited countries to a set quota of whales each year. By the time a ban on commercial whaling went into effect, in 1986, the Soviets had reported killing a total of 2,710 humpback whales in the Southern Hemisphere. In fact, the country’s fleets had killed nearly 18 times that many, along with thousands of unreported whales of other species. It had been an elaborate and audacious deception: Soviet captains had disguised ships, tampered with scientific data, and misled international authorities for decades. In the estimation of the marine biologists Yulia Ivashchenko, Phillip Clapham, and Robert Brownell, it was “arguably one of the greatest environmental crimes of the 20th century.”

Environmental extremists claim to love whales; but they love state-centric, authoritarianism collectivism even more. Whales can’t get you revenge on people who are happier or more successful than you.