Mitt Romney told a joke at a campaign event for Joni Ernst, the wannabe Republican senator from Iowa. It was a mild little thing. I have heard better Obama jokes (I am quite fond of the one that begins “A Muslim, a Kenyan, and a Communist walk into a bar…) But since the joke was directed at the Democrats’ god-king, it is, of course, being attacked as racist and hateful by the same people who thought Sandra Bernhard’s joke about Sarah Palin being gang-raped was pretty funny stuff.

The GOP … or at least the GOP IT Staff (I really doubt any of the RNC management is this clever)… did somewhat better with this Error Page on their website, which is also sending humorless leftists to the fainting couches. 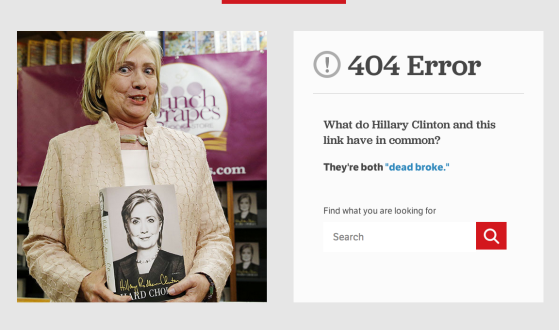