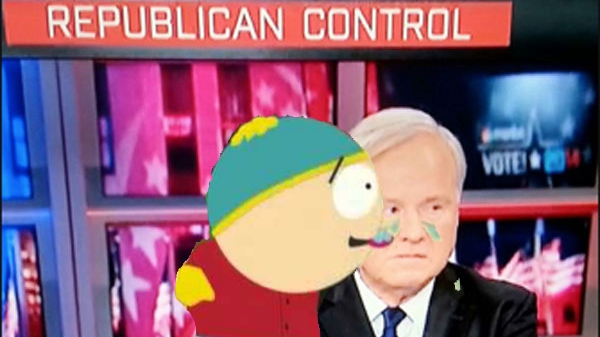 Democrat abortion fanatic and progressive doll Wendy Davis was solidly trounced in her bid for governor of Texas. One of her supporters responded with this: “KILL ALL THE BABIES YOU F-ing A-hole F- YOU A WOMAN SHOULD HAVE RIGHT TO HER OWN BODY WERE WAY TOO OVERPOPULATED.”

Whatever you say, Sweet Pea. One of Wendy’s Community Organizers isn’t taking the loss well.

At DailyKos, the wailing and gnashing of teeth goes on. Apparently, the Republicans haven’t even been sworn in yet (they’re still recovering from hangovers), but they’ve already outlawed abortion and installed a Theocracy.

President Obama isn’t the one that just made abortion illegal or impossible throughout this country. The Christian church and those that voted the Republicans into office are.

At the Democrat Underground Message Board (DUMB), they express cogent analysis.

Elsewhere, an elderly hippie in a pigtail is certain Republicans are plotting impeachment and his followers wail in despair.

The election results have been… really depressing (As a sufferer of clinical depression, this just piles it on and the gloating from the right is starting to edge me into dangerous territory. I’m trying to hold up as best as possible).

“Well, we can look forward to: unregulated banks, no health care, filthy air and oceans, and WAR, WAR AND MORE WAR. Thanks, folks!” – Bette Midler

Yup, just exactly like under both Bushes and Reagan… when there was no health care for anyone and the Congress actually spent money to import pollution from China and India because Republicans love pollution so much.

And it looks like the deranged feminists of the left have a new conservative woman to smack up.

The sound of Joni Ernst castrating hogs while she laughs about her hours slaving on the biscuit line will comfort us. We are certain that, despite all appearances, her Cruella de Vil laughter during her victory speech was not prompted by fond memories of secretly killing and feeding the fryer guy to her Hardee’s customers all those years ago.