Darron Smith, a Huffington Post Editor with a Ph.D in Education (Are you impressed?) is a SJW who writes for the Puffington Host and is apparently suffering from an acute case of BRDS (Black Republican Derangement Syndrome).

His derangement has led him to conclude that Mia Love … the Haitian-American Republican female elected to Congress last week… is the very embodiment of White Privilege.

“Love’s political convictions show a strong support for values that do not necessarily represent her interests as a member in any of these oppressed groups,” Smith writes. “For example, blacks are not doing well with respect to education, economics and health outcomes, while women still trail behind in salary and significant positions of power, and conservative politics are not typically known to aid these groups in such key issues. These actualities of Mia’s existence seem to be diametrically opposed to her values that are grounded in a white, male, Christian context.”

So, what he is actually saying is that white, Conservative, Christian values actually *work* in helping minorities achieve, but that blacks should categorically reject these values and continue to live in a state of dependence because the latter is more culturally authentic.

And he prattles on…

Probably because she doesn’t obsess over her own “victimhood” like “good minorities” are supposed to.

“Mia gets to walk through the hallowed doorways of white institutions controlled by elite, powerful men. She is allowed to pass through in her black, female body with the understanding that she must not see, speak or openly advocate for anything related to race or gender — an unholy compromise. Hence, she might look black, but her politics are red. This is one way white privilege is reproduced at the legislative level of government.”

I guess the white Democrat man who lost to her must have checked his privilege and lost the receipt. 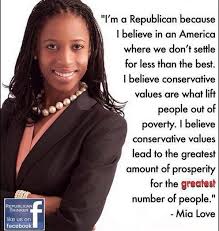 Joining in the BRDS is left-wing blog Wonkette… who declare Mia Love “crazy” for believing in things like hard work and fiscal responsibility.