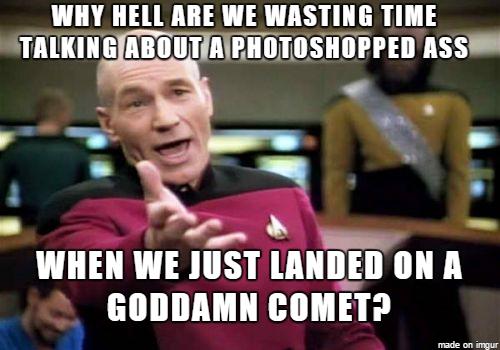 The landing of the Philae probe on Comet 67P/Churyumov–Gerasimenko was the scientific achievement of the century (though it may have escaped the notice of the LIV’s who were too busy swooning over Kim Kardashian’s butt).

But, if you’re a bitter horrible feminist SJW like The Atlantic’s Rose Eveleth, it’s just an opportunity to throw a tantrum because one of the scientists involved sent her to the fainting couch by wearing a Hawaiian shirt with purty girls on it.

Trigger Warning: Feminists, read no further. What’s after the jump might give you the vapors.

Thanks: Chris and RD Brewer