If I may be a bit incendiary, it’s really not difficult to figure out why The Emperor choose to spend Sunday afternoon watching football instead of standing in solidarity with the rest of the world against Terroristic Islam. There was no political advantage to going to Paris, of course. Also, the Emperor has what Hillary Clinton would call “empathy” for the terrorists, as they represent, in his view, the oppressed victims of Euro-Colonialism. One can look, as a matter of contrast, to the regime’s dispatch of three high-ranking representatives to the funeral of a thug in Missouri; which was both politically advantageous (whipping up the black vote before mid-term elections) and in synch with the Emperor’s sympathies.

A better metaphor for the absence of American leadership under Emperor Obama would be hard to find.

Just wondering, how do you suppose the left would respond if terrorists attacked FoxNews headquarters and killed 12 people? 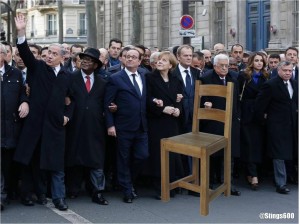