I really like Scott Walker, the courageous Republican Governor of Wisconsin, who has won three elections despite the Democrat left throwing everything in their arsenal against him … massive amounts of union money, a viciously hostile media, protests by parasitic rabble with nothing better to do, lawfare, politically motivated witch hunts and harassment of his supporters, and death threats against his children… and still prevailed.

And the mere fact that I like him proves to me that his potential 2016 candidacy is doomed from the get-go, because in 2012 I liked Tim Pawlenty, and in 2008 I liked Anybody But McCain. The fix is is in. The Establishment wants Jeb, and he will shoved down our throats, and we will be told to shut up and vote for him because if we don’t, Hillary will win. And it is very important to the Establishment that Republicans be in charge of implementing the Democrat agenda of amnesty, Obamacare, and the massive expansion of the progressive welfare state.

Anyway, here’s Scott Walker at that thing that happened in Iowa last weekend.  I like the way he talks like someone who actually understands the middle class in America; and doesn’t just see them as people he can wave to from his limousine while chuckling with his cronies at the US Chamber of Commerce that US workers are too lazy and expensive and need to be replaced with cheap foreigners.

And here is a campaign poster that makes me think, “Oh, if only…” 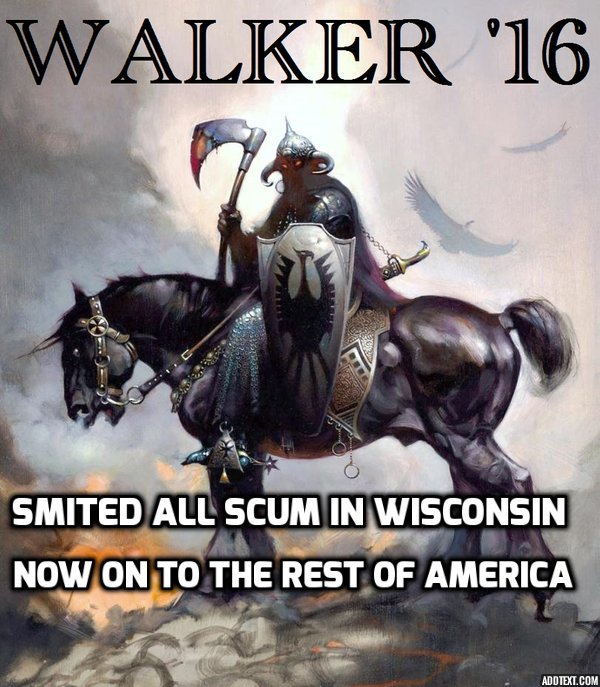