I knew a gay dude in college who carried a purse everywhere. Upon meeting someone he would always say, “I carry a purse, does that bother you.” One day I passed him on the quad and said, “What’s up, purse-boy.” And he got really offended by that.


I was reminded of that guy (What was his name? Paul? Pretty sure it was Paul, but then it might just be because Purse-Boy Paul is so irresistibly alliterative) when I read about this special snowflake getting all miffed up because he wasn’t allowed to bring his manpurse into the cinema. (Naturally, this happened in Florida)

Zac Adams told Bay News 9 he was banned from bringing in his bag because he’s a man. He secretly captured his discussion with a theater staffer on his cell phone camera.

“Because ladies carry big bags, that’s the normal thing for ladies to do,” a female manager tells Adams.

So he was already recording this when it happened? Sounds like a bit of a set-up.  But maybe some gay left hate group should burn the theater down, just to be sure. 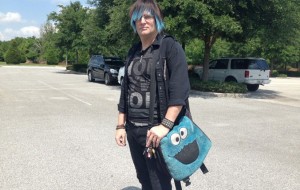