Would it be uncivil to suggest that lesbianese CNN pundit Sally Kohn is the dumber, blonder version of Rachel Maddow? I know I’m not supposed to be uncivil, but what else can you say about someone who … almost daily… spews idiocy like this: (Hat Tip: Ace)

One gets the impression that @sallykohn hasn’t thought about government a great deal. http://t.co/xKwzTuazXK pic.twitter.com/0wbmEFm5Ok

Of course, as long as Cher is alive, she won’t be the #DumbestWomanOnTwitter. (Hat Tip: Weasel Zips) 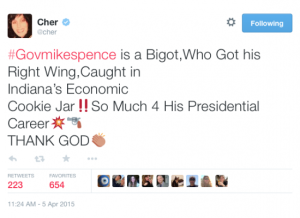