The Socialist dictatorship in Venezuela is nationalizing food distribution.

During a rally Friday, on International Workers’ Day, the socialist leader allowed a union activist to ask for the nationalization of food and essential-item distribution.

Citing new decree-making powers recently granted by the National Assembly, Maduro said he would carry out such a measure “in the coming days and weeks.”

Maduro had pledged earlier in the week to announce economic reforms.

Various estimates suggest the government already controls about half of the country’s food distribution, but that hasn’t stopped record shortages in shops and markets.

Venezuela’s equivalents of Nancy Pelosi, Chuck Schumer, and Rachel Maddow are already accusing critics of the plan of wanting people to starve. Because, according to the left, there is no way for people to have access to anything (health care, birth control, et c) unless it is directly provided to them or paid for by the Government. 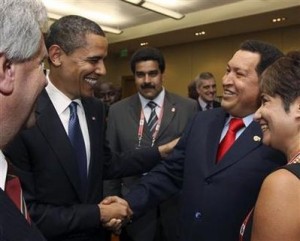