All I know is my gut says maybe.

One of the officials, who would not speak publicly about the federal charges in Chicago, said “Individual A,” as the person is described in Thursday’s federal indictment, was a man and that the alleged misconduct was unrelated to Hastert’s tenure in Congress. The actions date to Hastert’s time as a Yorkville, Ill., high school wrestling coach and teacher, the official said.

Sidebar: Sometimes, when I would bring up Gerry Studds in the comments and how Democrats re-elected him 9 times after it was revealed he sexually abused a 17 year old congressional page, a leftist would defend him on the basis that, “Well, at least he faced the voters, and they re-elected him.” Which pretty much is everything you need to know about the morals of progressive leftists.

And whatever Denny Hastert did (cough… Jerry Sandusky… cough) it’s still complete boolsheet that the Government can arrest you for taking your own money out of the bank. 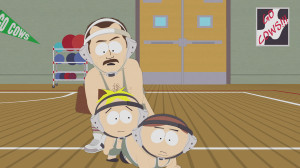