If you had to pick a single person to epitomize Barack Obama’s “fundamental transformation” of the USA, you could not do better than Caitlyn Jenner, who once achieved feats that brought the admiration of the entire world, but has chosen to become an emasculated, celebrity-chasing joke. 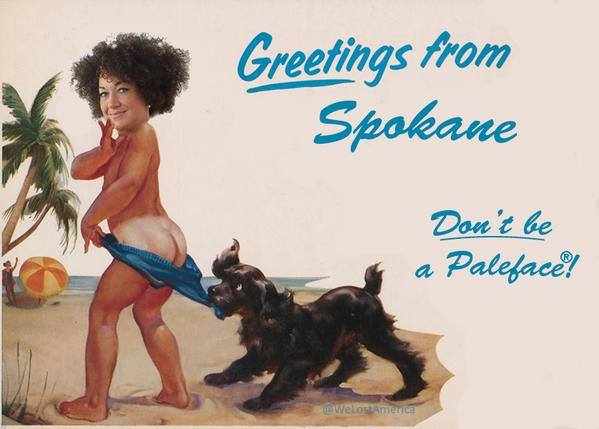 “I was drawing self-portraits with the brown crayon instead of the peach crayon,” she told Matt Lauer.

Whether her race-fluidity is a cynical exploitation of an academic and political culture that favors dark skinned people, a reflection of deep mental illness, or just an extreme example of a white person appropriating what respected social anthropologist Cher called “black cool,” it is striking that her effforts to change her identity have been not as universally lauded by the social progressive left as Caitlyn Jenner’s. (Although some leftists are willing to support Dolezal’s delusion.)

The Mister says that gender reassignment should be thought of as a form of therapy. If so, it is the only form of therapy I know that involves validating a psychological delusion. Well, that and telling women who haven’t really been raped that it’s totally okay for them to believe they were raped and even seek retribution against the men who didn’t rape them but could have.

Once it’s been decided that some delusions should be indulged, where do you draw the line between what to indulge and what not to indulge? Is it as simple

One of the reasons transgenderism is impressed is because the progressive left is highly Freudian and will eagerly embrace anything that seems kinky and pushes the envelope of hedonistic self-indulgence; although very few progressive left men would hook-up with Caitlyn Jenner given the chance.

Transgenderism is also accepted simply because of technology; chemical and medical procredures exist that make it possible to mutilate the male form into a crude facsimile of the female form and vice versa. This creates something of a dilemma for progressive leftists who embrace gender fluidity but are uncomfortable with race fluidity since surgically altering features and chemically altering skin tone to more resemble those of another race are also possible. So, it is not merely a matter of “what science can do.”

Also, transgenderism is attractive because it subverts The Patriarchy. Allowing people to decide their own racial identity, on the other hand, undermines the leftist coalition. Nothing could quite smash the whole culture of affirmative action and race preferences like millions of “trans-racial” Caucasians suddenly coming out of the closet as black and demanding that their identity be respected and that they be given access to scholarships, educational opportunities, and jobs set aside for minorities.

Above all, the fixation on Caitlyn Jenner and Flozell of Spokane at a time when Chinese hackers are stealing state secrets with impunity; when the Chinese, Iranians, and Russians are laughing at our military; when our economy is being sustained only by massive Government borrowing (that can go on forever, right?) shows that, as a culture, we no longer care about Serious Things. We have lost sight of what matters, and instead are locked into a cycle of self-validation through self-gratification and fixation on frivolous identity culture.