There is a danger in making concessions to insane radicals.

The idea of banning the Confederate flag in response to a shooting that had absolutely nothing to do with the Confederate Flag began with dim, soft-bellied Republican politicians like Mitt Romney and Jeb Bush who thought consigning the Confederate Battle Emblem to museums would be a nice, feelgood concession to the left which would heal wounds and bring us all together.  Others said, “This isn’t about banning the flag, it’s about taking it off Government buildings and you’re silly (and racist) to think it will go any further than that.”  Others said, “I’m not a southerner, so I don’t care about that flag. Let’s just concede the argument so we can put this all behind us and move on.”

It didn’t quite work out that way. Instead, companies like WalMart, eBay, and Amazon upped the ante by banning sales of Confederate Battle Emblems entirely; the National Park Service joined in, too.  Apple has reportedly removed Civil War Games from their app store because they use the CBE.

So much for those who insisted this wasn’t really a ban.

Sensing weakness, the crazies of the left immediately pounced and began demanding more concessions; and nothing short of an ISIS-style erasure of American cultural history and icons will satisfy them now.

In dealing with the left, one must remember that they are a selfish and irrational people. Political Correctness is the outward expression of their piety in their progressive socialist religion. They demonstrate their moral purity to one another through one-upmanship, no demand is so crazy that it cannot be topped be an even crazier demand. It’s a game no one can ever win.

Put another way, if you give a monster a cookie, he’s only going to demand more cookies. 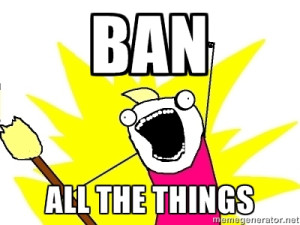 Funny thing. When the Democrats held the South politically, southern culture was celebrated. Now that the south is Republican red, they suddenly hate its culture and everyone who lives there.