A very, very stupid woman from Florida is offended that JC Penny’s sells a shirt with the slogan, “Sun’s Out, Guns Out” on it. She claims it “glorifies gun violence.” 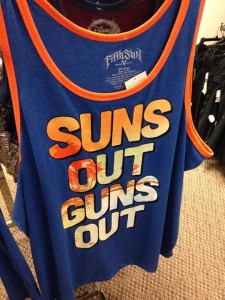 After all, a local TV station apparently thought this idiotic woman and her idiotic state of offense were newsworthy.

We live in a culture that caters to, celebrates, and politically empowers stupid people.