California has already achieved what many on the left in both parties dream of; replacing an informed middle class electorate with an army of compliant, third-world peasants. (Governor Jerry Brown recently signed a bill making it much easier for illegal immigrants to vote.)  The next step is a disarmed citizenry at the complete mercy of the state, and ambitious Democrats are putting a measure on the ballot to move closer to that goal.

(Democrat Lt. Governor Gavin) Newsom’s proposal would also beef up rules for ammunition sales and purchases, applying the same rules that already exist for firearms. Someone buying bullets would be subject to the same background check as someone buying a gun.

It would ban the possession of large-capacity magazines – more than 10 rounds – and require anyone who currently has them to sell to a licensed firearm dealer, transfer them out of state or relinquish them to law enforcement to be disposed of.

i.e. They will be confiscated.

The end game for the Democrats is to get a majority of radical left justices on the Supreme Court who will nullify the Second Amendment. In the meantime, their goal is to make life hard for law-abiding gun owners.

Some Democrats still deny that gun confiscation is the ultimate goal (although others have admitted that this is exactly the goal). A few years ago, many Democrats denied being Socialist, and now Bernie Sanders is a viable candidate for the Democrat nominations. Leftists will never admit the truth about their agenda until its too late to do anything about it. 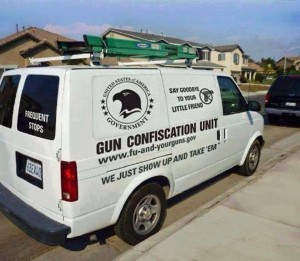