This is a thing that’s going around. 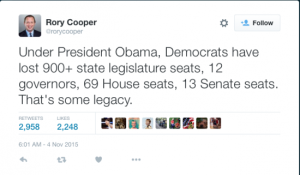 The implication is that Obama’s presidency has been bad for the Democratic Party. I guess you could make that case, kinda sorta. And since the Democratic Party threw themselves all-in to his Cult of Personality, it’s kind of Karmic that it would lead to their withering in state governments and Congress.

But I don’t think Obama or his Alinskyite backers care very much about states or legislatures. Obama has been spectacularly successful in centralizing autocratic power in the executive branch; aided and abetted by Republicans who are either too timid to oppose him or actively collaborating. Obama has unilaterally re-written welfare laws, immigration laws, environmental laws, and labor laws. His administration has imposed policies on the states ranging from dictating what school children may eat for lunch to how states may use natural resources. The Democrats may be losing power in the states and legislatures, but Obama has largely made them irrelevant.