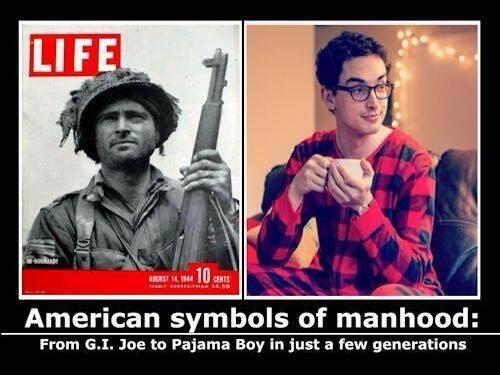 Commenter Sean L laments the difficulty of finding a solid man in a world of “narcissistic brats.”  Finding worthwhile companionship in the college and post-college years has always been a challenge. But there is reason to believe that it is harder for current twentysomethings. I have three sons in their twenties. All of them are straight, but one is quite Metrosexual and displays a lot of the shallow narcissism Sean L laments, although the rest of us just call it “Douchebaggery.” I am wondering where it comes from; why do so many 21st Century men want to be whining little pussies?

To me, the answer lies in the feminization of the culture. The culture we live in certainly prolongs adolescence and irresponsibility. It even extends into our laws, where 26 year olds are treated as children for purposes of Obamacare. Also, feminism and the sexual revolution have done a great deal to abolish masculinity, especially so on the blue coasts, but every part of the culture is feeling it.  There have been a number of books on the subject, including the latest, Heavy Lifting: Grow Up, Get a Job, Raise a Family, and Other Manly Advice by NRO’s Jim Geraghty and radio talk-show host Cam Edwards.

Once upon a time, men in their twenties looked forward to settling down and having children.

Today, most young men seem infected by a widespread Peter Pan syndrome. Unwilling to give up the freedom to sleep late, play video games, dress like a slob, and play the field, today’s men wallow in an extended adolescence, ostensibly unaware that they’re setting themselves up for a depressing, lonely existence.

Feminists have made normal romance, courtship, and marriage a minefield of potential traps for the incautious male. There are no more rewards for growing up, only penalties. Does that explain the whole state of maleness today? Or are there other factors. I am just throwing this out there for conversation. I really don’t know.