Well, there it is. The stupidest possible response to Paris Attacks. From an MSNBC idiot progressive with a stripper name. 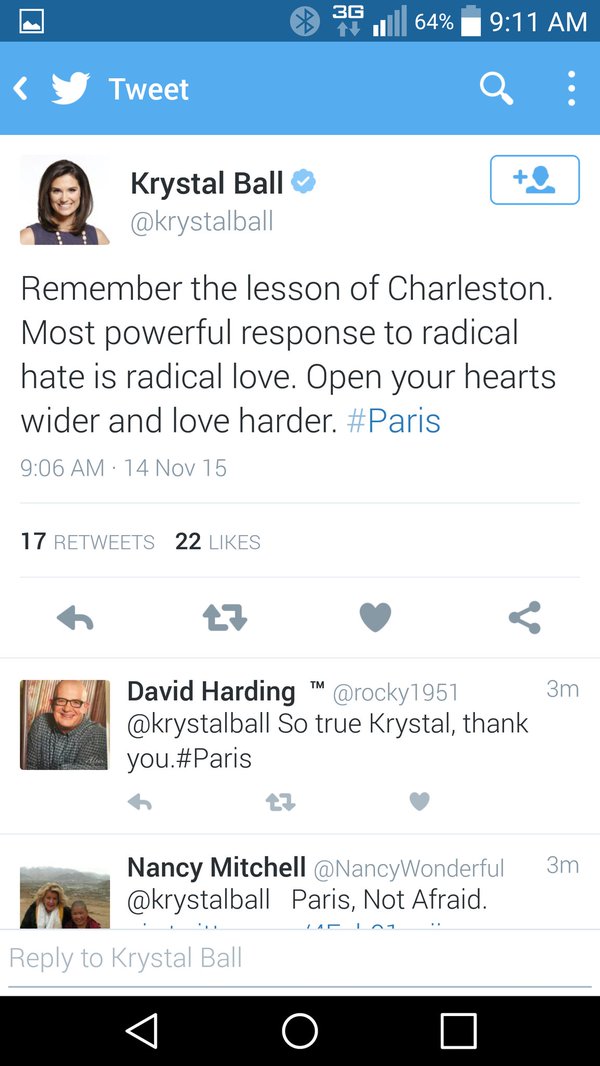 Sick and tired of all these progressives who attack people who just want to cut Government spending a little as “terrorists who must be destroyed” because cutting welfare spending “doesn’t reflect our American values.” And then when real terrorism happens with real violence and real death it’s like, “Hugs all around everybody, let’s form a healing circle.”

These people are so stupid, they’d hug a grizzly bear and try to make friends with it.

A suggestion for Ms Krystal Ball; why don’t you take your ‘Peace and Love’ act to Malmo, or one of the No-Go Zones in Paris you claim don’t exist. Walk down the street wearing something sexy; see how that goes for you.

And to all the phonies on Facebook and Twitter changing their profile pictures to French flags and retweeting #StandWithParis hashtags: Bite me.  A lot of them are the same people that denounce those of us on the right who insist on seeing Islamism for what it is: a threat to gays, women, and Western Civilization. When we said mass importation of Mohammedans was a bad idea, they called us bigots and racists. Now that they see the results of their policies, they’re all, “Oh, such a tragedy. We must stand strong.” It’s not a tragedy, you idiots, it’s a massacre committed by barbarians that you side with over the civilized.

Oh, and some idiot in Paris hauled out a piano and played ‘Imagine.’ Yeah, that will totally address the problem.

If you really really want to do something about the threat of terrorism, then this is what you should do:

1. Buy a firearm, learn how to use it, carry it wherever it is legal to do so.

2. GTFO of any large American city, they are all terror targets, and it’s only a matter of time before the Islamo-Barbarians carry out a massive attack here.

3. Do not count on politicians to do anything for you; they are worthless.

By the way, Obama’s Stupid Spoiled Children are all butthurt because the Paris attacks drew attention from their demands for  Safe Space and Free Sh-t.