Democrats have come under criticism for refusing to label the people who killed 40 people in Beirut last Thursday, 130 people in Paris last Friday, and 28 People in Mali this morning as “Radical Islamists” or “Islamic Extremists.”

Put on the defensive, Democrats have responded with a propaganda commercial accusing Republicans of hating Mohammedans.

The problem is that no Republican has accused all Mohammedans of being terrorists. The Democrats couldn’t even find one quote from any Republican to distort in their ad into making this accusation. Republican candidates for president have been extremely careful to draw a distinction between “Radical” Mohammedans and non-violent Mohammedans.

The only people who aren’t making this distinction are the Democrats. Thus, the Democrats imply, through their propaganda ad, that there is no distinction to be made between Islamic Terrorists and All Muslims. Republicans say, “We want to keep terrorists out and defeat Islamic Extremism.” Democrats say, “You just attacked all Muslims.”

Ipso Facto, Democrats have just said that Mohammedans are radicals and terrorists 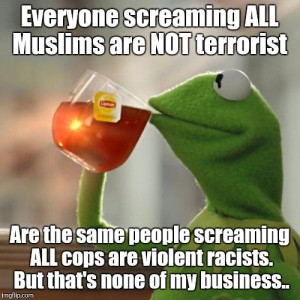