The New Republic, a Progressive Left ‘zine owned by a gayzillionaire who made his fortune from the hard work and sacrifice of being Mark Zuckerberg’s roommate at Yale and tried to buy his husband a Congressional seat from New York … has revealed that the talk of “Common Sense Gun Regulation” really is just a smokescreen for the ultimate goal of gun prohibition.

Ban guns. All guns. Get rid of guns in homes, and on the streets, and, as much as possible, on police. Not just because of San Bernardino, or whichever mass shooting may pop up next, but also not not because of those. Don’t sort the population into those who might do something evil or foolish or self-destructive with a gun and those who surely will not. As if this could be known—as if it could be assessed without massively violating civil liberties and stigmatizing the mentally ill. Ban guns! Not just gun violence. Not just certain guns. Not just already-technically-illegal guns. All of them.

There’s no reason or logic given for supporting a Gun Prohibition, just the usual Progressive Left formula of social control. “*I* don’t like X, therefore *you* should be prohibited from X.” The left has already decided that Gun Prohibition is the goal. The New Republic is just debating tactics. 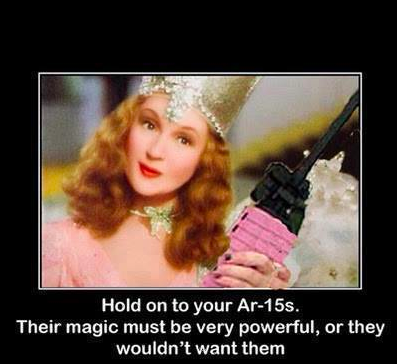