Apparently, the Talking Point has gone out to all organs of the left to promote the “Republicans are running on FEAR” meme.

This ‘Fear’ rhetoric is a back-handed way for the left — people so frightened by words that they require Speech Codes and Safe Spaces — to call Republicans cowards, and portray themselves as brave for standing strong in their politically correct Groupthink. The meme is summed up by this has-been, washed-up blogger desperately trying to suck up to the Democrat Left:

“Fear is what the Republican Party’s selling this election. Well, every election to be precise, but this time around it’s pretty much taken over all the messaging: fear of immigrants, fear of refugees, fear of liberals, fear of Hillary Clinton, fear of socialism and communism and all kinds of imaginary stuff that goes bump in the Republican night. And above all, fear of Muslims. Since fear’s closest cousin is hatred, we’ll be getting a serving of that, too, but it’s really just a thin layer on top of a rich base of pure fear.”

The thesis that all of the “fears” raised by Republicans are illegitimate would only be (somewhat) valid if there had been no Islamist terror attacks under Obama, that there were no Islamist terror organizations threatening future terror attacks against Americans, and is there were no possible way that terrorists would enter the USA (or France) under a refugee, visa, or immigration program.

Look, just because I fasten my seatbelt when I drive, does that mean I’m “living in fear” of other drivers? Does the fact that I wash my hands after handling raw chicken mean that I’ve “given into fear” of Salmonella? No, it means I am taking common sense measures to protect myself against tangible dangers.

Securing the border, making sure the people we let into the country aren’t going to murder Americans… these aren’t crazy, fear-driven ideas. They are utterly rational and common sense. And so is Donald Trump’s idea of suspending immigration from hotbeds of Islamist terror until we get a better handle on how to manage it.

Irrational fear would be something like, oh I don’t know, suspending Constitutional Rights to deny law-abiding Americans the right to own a gun. 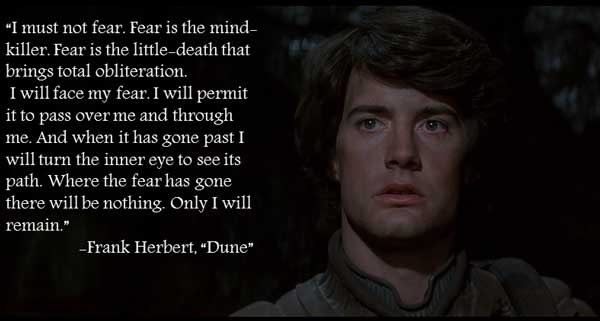