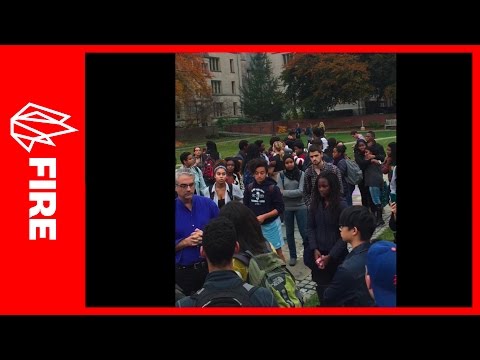 The shrieking harpy in this video was upset because the gentleman in the video sent an email in which he expressed an opinion that it really wasn’t the university’s business to regulate how students should dress up for Halloween.

2015 was the year every college campus (seemingly) became Berkeley. College students at the University of Missouri threw a massive hissy fit (led by the privileged black son of a millionaire father) because they didn’t think their solidly-left-wing president expressed sufficient solidarity with students upset over racial incidents of dubious providence occurring on or near campus. Students at Oberlin College in Ohio threw an end year tantrum because cafeteria food was servedin a manner deemed insufficiently culturally sensitive.

In Baltimore, #BlackLivesMatter activists (and the people they claim to represent) burned out their own neighborhoods and killed each other some 343 times so far in order to teach the White Power Structure a lesson; the White Power Structure in this case being a city run by a black mayor, a majority black city council and a majority black police force led by a black police chief. Activists in Oakland CA and Ferguson MO made their feelings known in a similar matter. Other activists took on the white power structure by shutting down shopping malls and highways and by staring at white liberals eating Sunday brunch.

Other feminists showed their outrage at being objectified as sexual objects by joining in Slut-Walks and parading around half-naked.

There was also the Mohammedan woman who became a hero to the cry-bully left when she threw a tantrum because a flight attendant didn’t give her a full can of soda (which nobody gets in the Age of the Flying Cattle Car).

Black activists, spoiled college brats, and feminists were joined in 2015 by science fiction writers… of all people. The Hugo awards were effectively sabotaged by Social Justice Warriors, who decided if awards couldn’t be given on the basis of Victim-Group Identity, they would rather give no awards at all.

And it wasn’t all on the social justice left. Some of the most epic tantrums came from the Republican Establishment as they realized their plans for a Bush sequel were being shot down by vulgarian with a ridiculous hairdo.

The really scary part of this is look at the video again. The target of that deranged woman was forced to resign. Also, the president of the University of Missouri was forced to resign. And Oberlin officials apologized for serving ethnic food in a culturally insensitive manner and promised to do better in the future. The tantrum-throwers are winning. So, it’s only going to get worse.