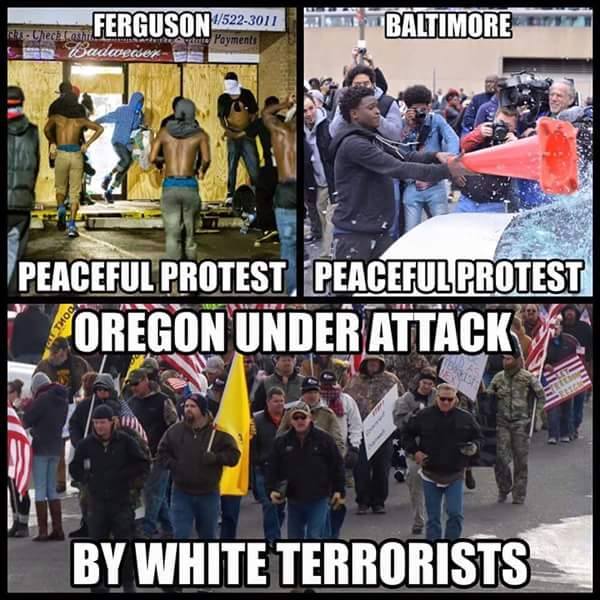 #OccupyWallStreet took over public spaces in major cities and remained in them for months, committing crimes of vandalism and rape, as the media stood by and cheered and prominent Democrats rallied to their cause.

#BlackLivesMatter blocked freeways, burned down and looted neighborhood businesses, assaulted police, and threatened more violence. Once again, the media said that their grievances were legitimate, the violence was understandable if not necessarily justified, and Democrat politicians said we needed a “national dialog” to address their concerns.

But when a handful of ranchers and “militia” non-violently take over an unoccupied building in a remote western wilderness, all of the sudden, bloodthirsty leftists call it a “Terrorist Attack” and demand for them to be killed … because of the importance of the “Rule of Law.” (Which is apparently not so important when it comes to #BlackLivesMatter protests or Sanctuary Cities, but that’s a topic for another time.)

FWIW, I am pretty sure the “armed hillbilly militia” in Oregon isn’t going to be burning down any local businesses, defecating on police cars, or necessitating any “rape tents” at the locale of their protest.

There are murky legal issues underlying the events behind this particular incident. Whether or not the Federal prosecutors were justified in seeking “Terrorism” charges against the ranchers is a question people of good faith can differ on. It’s not necessary to agree with their tactics, but one has to acknowledge that given that the Coastal Media and Political Elites have zero interests in the issue of land rights in the West, it’s difficult to see what, if any, alternatives they had in raising awareness.

By and large, the elite left does not see a problem with the Federal Government outright owning 62% of Alaska, 62% of Idaho, 81% of Nevada, 67% of Utah, 53% of Oregon, 42% of Arizona. To coastal progressive elites, it seems right and natural that political appointees and bureaucrats with Public Policy degrees should manage these lands from offices in Washington. It’s axiomatic that those “hillbillies” in “flyover country” cannot be trusted to manage their own lands themselves. Not without a degree from Georgetown and a graduate thesis on “Transgender Issues in Forestry Management” they aren’t.

With the media not finding the Western Land issue “Sexy” enough to cover in the absence of “armed hillbillies,” and politicians oblivious to it, it’s difficult to see what other recourse the aggrieved ranchers and other inhabitants of the west have.

What’s happening in Oregon is yet another microfracture on the skin of society. Government is ineffectual at best and malignant at worst, and there is little hope for meaningful reform. It seems inevitable that these little cracks are going to grow in both size and severity, and if Government does as the progressives suggest and crack down even harder on the dissidents, it will likely accelerate the effect.