If the fanatically pro-abortion feminists at NARAL were trying to persuade us they are not fanatically pro-abortion feminists, they came up a little short by putting out shrill, deranged tweets during the SuperBowl attacking pretty much every commercial for not advancing the femiist agenda (because, you know, that’s what SuperBowl commercials are supposed to do). They were furious that a Doritos commercial depicted a non-aborted baby.

Their tweets read like parodies of how anti-feminists would depict humorless, angry, radical feminists. But they are not parodies. This is what the left is. Everything must serve the political agenda. Every commercial must advance the cause. (At least they got a thoroughly politicized half-time show from Beyoncé.)  Life should be nothing but an endless series of lectures on how wrong you are.

So is it also with feminism. 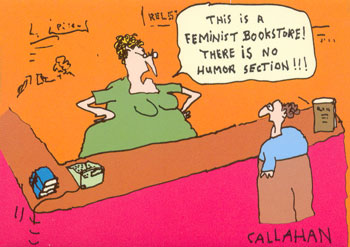