Leftists are overjoyed over Twitter’s high-profile banning of outspoken conservatives, and defending Twitter’s conservative-purge on the basis that, “private businesses can ban anyone they want.”

OK, so Twitter can ban conservatives, but Christian bakeries still have to participate in gay weddings, because “Shut Up.” 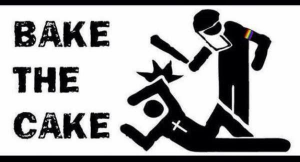