In Germany, they are introducing Women-Only railcars to protect women from sexual assault.

Germany will join India, Mexico, Brazil, Egypt and Indonesia as a select few countries that have segregated carriages for women and children.

Gee, Germany didn’t have a problem with rape until very recently. I wonder what could possibly have changed?

So far, barely a peep from feminists about this segregation. They are much too concerned with identifying the correct gender pronouns to use to express to 57 genders, fighting “white privilege,” and figuring out the gender of glaciers to concern themselves with little things like demographic oblivion.

But remember, anyone who is worried about “creeping Sharia” and the dhimmitude of Western culture in the face of Triumphalist Islam is a lunatic and an extremist.

Also, did you hear about the Moderate Mohammedan shopkeeper who wished his Christian patrons a Happy Easter? His fellow Mohammedans beat him to death for it. 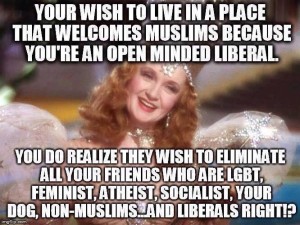