According to the Huffington Post, it should be illegal for you to defend yourself because it denies “justice” to criminals who attack you. I am not making this up. (HT: AoSHQ ONT QOTD)

The main problem with the notion of self-defense is it imposes on justice, for everyone has the right for a fair trial. Therefore, using a firearm to defend oneself is not legal because if the attacker is killed, he or she is devoid of his or her rights. 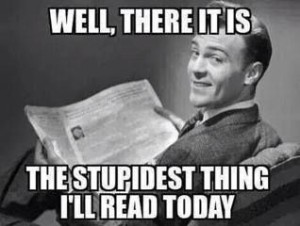