Recently, U.S. Attorney General Loretta Lynch compared HB2 to Jim Crow. Jim Crow laws were put into place to keep an entire race positioned as second-class citizens. HB2 simply says that men and women should use the restroom of their biological sex in government buildings and schools. This comparison is highly offensive and utterly disrespectful to those families and individuals who have shed blood and lost lives to advance the cause of civil rights. I take this as a personal slap in the face because I was an active participant in the civil rights movement.

I kind of sense that this whole left-wing obsession with “Transgender Rights” is because after electing a black(ish) president and forcing gay marriage by judicial fiat, there pretty much aren’t any real civil rights struggles left. But the Civil Rights movement is the one thing the left thinks it got right, and all the old leftists want to relive that “struggle” (even if they only watched it on TV from the safety of an all-white neighborhood) and all the young leftists want to feel like they’re doing something important to “change the world.”  So, of course, the slightly hurt feelings of gender appropriators have to be elevated to the same plain of people who were denied rights under the color of (Democrat-imposed) laws and were hit with firehouses and bombs. FWIW: I was in North Carolina this week for business. Both of the in-state airports I passed through had unisex bathrooms. The company that hosted us had nothing but single-occupant unisex bathrooms. The Left is making a big stink about nothin’.

On a related note, the Charlotte (NC) Observer — in defense of Transgender Bathrooms — says the sight of male genitalia isn’t a big deal and women just need to get over it. [Tell that to college feminists. Or, try to.]

Also, apparently boys have periods now, because leftists are insane. 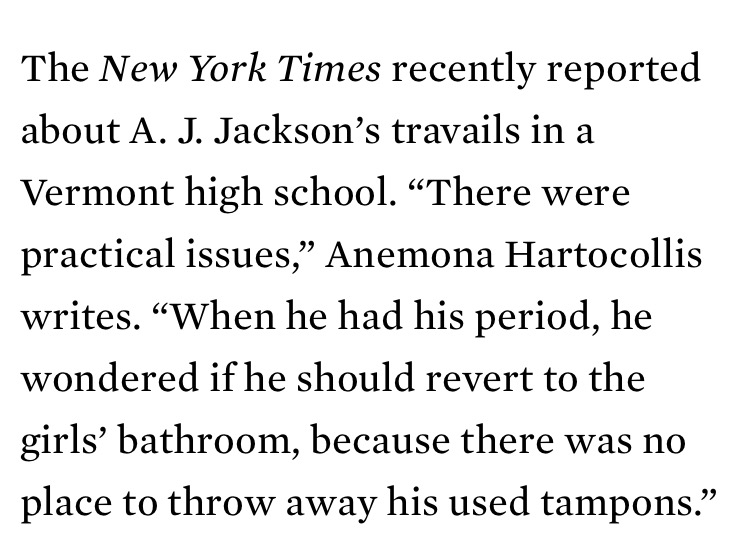