Not to be outdone by the BBC documentary wherein a “Transgender Teen” describes the unfairness and bigotry of normal boys who aren’t into his penis, the rival Channel 4 Network broadcasts an in-depth exploration of  the world of “Pup Play.”

Secret life of the ‘human pups’: Weird world of the grown men who enjoy dressing up as DOGS in roleplay craze sweeping the nation 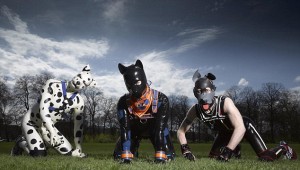 As long as “Pup Play” remains a harmless private fetish, and men who identify as dogs don’t demand that society redefine itself to accommodate their fetish, I have no problem with it.

Its probably something that won’t last long after Britain becomes part of the Islamic Caliphate. Mohammedans hate dogs. And submission to Mohammedans is another popular fetish of the British (and American) left.

Of course, not all fetishes are harmless fun. A post on a (NSFW) website devoted to the fetish of deliberate HIV transmission wonders, “Why do Republicans Hate Gay People?”

So you’re on a website that fetishizes and celebrates the deliberate spreading of HIV, including many threads devoted to “stealthing,” (i.e., lying about hiv-status in order trick hiv-negative guys into having unprotected sex), and you are wondering why some Republicans have a problem with gay lifestyles.

Do they not teach math where you come from?