JK Rowling has a message for all the Trigglypuffs and Social Juicebox Wankers seeking to shut down the right of others to disagree. 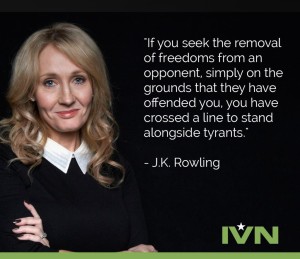 The full context of the quote; she despises Donald Trump, but would not deny him the right to be heard because that’s what tyrants do.

“His freedom to speak protects my freedom to call him a bigot,” Rowling continued. “His freedom guarantees mine. Unless we take that absolute position, without caveats or apologies, we have set foot upon a road with only one destination. If you seek the removal of freedoms from an opponent simply on the grounds that they have offended you, you have crossed a line to stand alongside tyrants who imprison, torture and kill on exactly the same justification.”