This is (apparently and as far as I know) a real, genuine Hillary campaign pitch; not a parody of what a desperately corrupt and out of touch elderly politician long-past-her-sell-by date would do to reach out to what her advisors tell her is a key voting demographic. 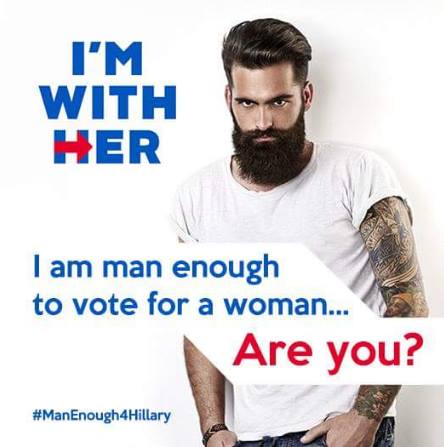 Is it just me, or is there a weird disconnect between the hipster neckbeard and hipster top-mullet? Like they were photoshopped from two different people. And shouldn’t he have a man-bun?

Sanders was introduced by a blind Filipino delegate and a gay actress who spoke passionately in favor of transgender rights and compared Sanders to a unicorn, because “he seems too good to be true.” Sanders, leaning on his lectern with both hands, recounted a moving encounter with a barista whose eyes filled with tears of gratitude for Sanders’s campaign. A man waved a homemade Sanders muppet in the air.

Update: Hillary’s staff should have been more careful in their use of stock images.

Updated Update: Hillary’s campaign is disavowing the ad. So, if you trust Hillary to own up to an embarrassing mistake, feel free to believe her denial.