Last night, my Significant Other decided he wants a concealed carry license.

He said it’s because he doesn’t believe Hillary is going to do anything to protect us from “violent extremism.”

And because his gay friends on Facebook are twisting the Orlando Gay Disco Massacre into Democrat-friendly narratives. “It weren’t Islamism, it were the guns! Bad, bad guns! Also it were the fault of Conservative Christians, somehow.”

He has come to realize that leftists are insane and self-destructive and wants no part of it.

Last month, he wouldn’t even go to the range with me. He thought the only reason I owned guns was because I have a streak of defying authority.

But after Orlando, he sees things differently.

So, he asked me to sign him up for a concealed carry course.

I can’t wait to take him gun shopping. 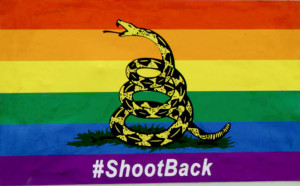