More than anything, Peter Thiel, the billionaire technology investor and Donald Trump supporter, wants to find a way to escape death. He’s channeled millions of dollars into startups working on anti-aging medicine, spends considerable time and money researching therapies for his personal use, and believes society ought to open its mind to life-extension methods that sound weird or unsavory.

Speaking of weird and unsavory, if there’s one thing that really excites Thiel, it’s the prospect of having younger people’s blood transfused into his own veins.

As society becomes more automated and wealth more concentrated, it’s not a hard leap to imagine a dystopian future where the poor and young have nothing to offer but their bodies to the wealthy and old.  Other billionaires are pumping money into research toward having their consciousnesses transferred into a cybernetic realm. Of course, that wouldn’t actually be your consciousness, would it? It would just be a copy of it. You’d still be dead; there would just be a copy of you stored in cyberspace.

The amount of ego and narcissism … hubris, I suppose… is epic; to believe you are so important that your essence is worth preserving at any cost. I imagine thousands of lives of less fortunate people could be made better for the fortunes being poured into this research. And at the end of it…. supposing they even achieve their goal… they are merely prolonging their existence in a deeply flawed, imperfect world (although I am pretty sure the flaws and imperfections are less apparent if one is a billionaire). 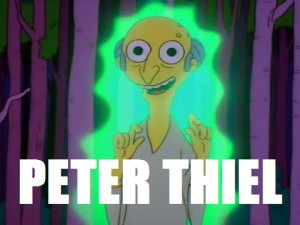