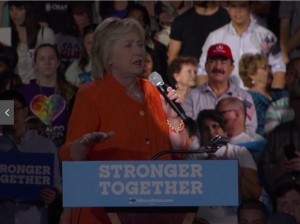 He’s the guy sitting right up front in the red hat. You may recall his “God will punish those involved in homosexuality,” comment from around the time his son decided to take that responsibility for himself. But remember, the same FBI that said Hillary didn’t break the law enough to warrant prosecution also said that the Orlando Disco Massacre wasn’t a hate crime. In fact, the FBI still has absolutely no idea why Omar Mateen shot up the Pulse nightclub. The only clue they have is that he pledged his support to ISIS and screamed ‘Allahu Akbar’ as he shot the place up. The FBI believes ‘Allahu Akbar’ may be Spanish for ‘Climate Change.’

Remember how it was supposed to be a big deal that David Duke had endorsed Trump? Yeah, I don’t expect the media to make a big deal out of this for some reason.

Question: Do you think the Hillary people are smart enough to have planted this guy in the audience to bait Trump into going off-message on another week-long tirade?

Update: The Hillary campaign is claiming the event was open to the public and they had no control over who was attending. And perhaps there are people dumb enough to believe that all attendees at Hillary events are not carefully screened and vetted. Probably the same people who really believed that the $400M Obama sent to Iran in foreign currency in an unmarked jet in the middle of the night wasn’t really a payoff.

Incidentally, the New York Times (“Fire Bad!”) openly admits that they are going to do everything possible to make sure Hillary wins. Really, the only difference between this and any other election is they’re open about it this time.

Here he is on video. He really likes Hillary’s gun control position. A lot.