A few weeks old, but I have been debating commenting on it and finally decided to comment on it. It was as part of a response to a question about religious liberty.

I mean under the guise of religious freedom, anybody can do anything. Back to Mormonism. Why shouldn’t somebody be able to shoot somebody else because their freedom of religion says that God has spoken to them and that they can shoot somebody dead.

So, what he is saying is… and he is running as a “libertarian,” mind you… is that if the Government doesn’t force people to bake cakes for gay weddings even if they have religious objections to it, then it’s going to be okay to kill people of other religions in the street. 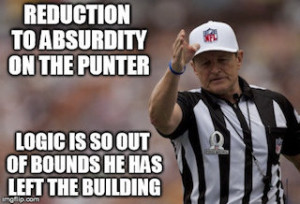 That is just plain shabby reasoning. Reasonably, there is no compelling reason for the Government to force anyone to bake a cake for someone else’s wedding. No harm results from such a refusal. The gay in question can simply seek out a baker willing to supply the cake. At very worst, they have to do without a cake. That comes nowhere near rising to the level of murder; where there is a compelling state interest to prevent harm.

Can I, in good conscious, vote for someone who really thinks it’s the Government’s business to force people to be nice to each other? I might as well vote for Hillary.

Not even if the alternatives are corrupt lying harridan and Trumpster fire.