Obama 2005:  President Bush should have gone to New Orleans after Katrina, and his failure to do so shows his indifference to the suffering of the victims.

“When the people of New Orleans and Gulf Coast extended their hand for help, help was not there. When people looked up from the rooftops, for too long they saw an empty sky. When the winds blew and the flood waters came, we learned for all of our wealth and our power, something wasn’t right with America. We can talk about what happened for a few days in 2005, and we should. We can talk about levies that couldn’t hold, about a FEMA that seem not just incompetent but paralyzed and powerless, about a president who only saw the people from a window on an airplane instead of down here on the ground, trying to provide comfort and aid.”

Obama 2008:  “The bargain that any president strikes with is, you give me this office and in turn my, fears, doubts, insecurities, foibles, need for sleep, family life, vacations, leisure is gone.” (Yes, Hilariously, King Putt promised he would give up vacation and leisure activities if elected president.)

Obama 2016: Interrupts his Martha’s Vineyard vacation for a Democrat fundraiser, but not to travel to Louisiana after massive flooding. The Obama Administration, however, has stepped up and ordered relief workers not to engage in racial or other discrimination because that’s of course, the first thing you worry about when thousands of people have lost their homes, jobs, and livelihoods.

“In a 16-page guidance issued Tuesday, the Obama administration, led by the Justice Department, warned Louisiana recipients of federal disaster assistance against engaging in ‘unlawful discrimination on the basis of race, color, or national origin (including limited English proficiency)'”

Really, though, Obama supporters don’t give a damn about Obama’s response to the disaster, and they never really cared about Bush’s expect to the extent they could use the latter as a political cudgel against him. Leftists care about power, and nothing else.

Where’s Hillary?  Can’t do Louisiana, too busy shaking down big donors for money.

Where’s Trump? Oh, he went down to New Orleans with his running mate to check things out and hand out relief supplies. And the Democrat Media Complex has the nerve to caution him against “seeming craven, using crises for political gain.” 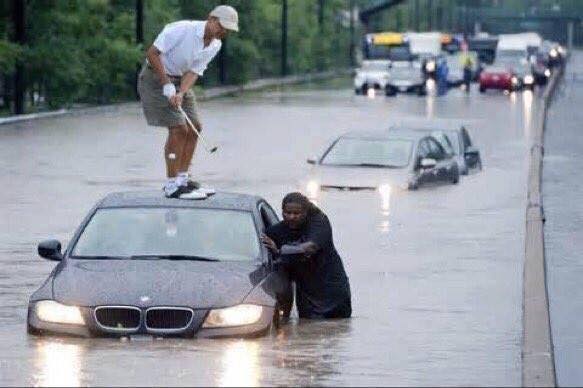