Remember the ur-leftist who sneered at Ben Shapiro that his belief in freedom was “cute?” That debate actually took place in 2014. It took some digging, but I was finally able to attach a name to the High Priest of Leftist Government … Professor James Wellman, chair of the comparative religion department at University of Washington. And while he is a Presybterian minister, his main religious belief seems to be White Guilt.

I remain a part of the Christian tribe and a country that does not live up to taking care of the orphan, the poor, the invisible ones. A country that has done great damage to other cultures and yet one that claims over and over again to be exceptional. So I live with the guilt of being in this country and accepting its privilege and knowing how much damage a dominate Christian culture has done to native people, gay people, black people, Iraqi’s (sic), women it makes me repent.

And because he has sadfeels about being white, all other people should give up their freedom and bow to Government. But I notice his White Guilt has not led him to quit his well-paid, taxpayer funded sinecure as Chair of the comparative religion department at University of Washington and give it to a native person, a gay person, a black person, an Iraqi’s or a woman. 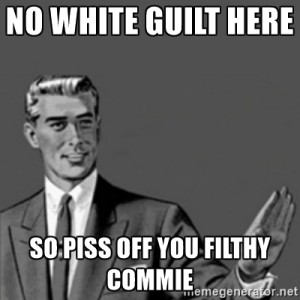