Is there any reason, other than catering to the boundless narcissism of gay activists, for idiotic cupid stunts like this?

Around 50 sets of traffic lights near busy Trafalgar Square had their “walk” and “green man” images replaced with the new designs in June to coincide with an annual Gay Pride Festival.

Officials said the seven different same-sex symbols were designed to show Transport for London’s “support for lesbian, gay, bisexual and trans diversity” in the capital. 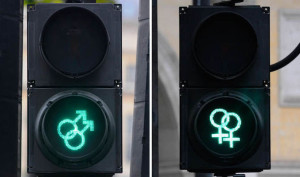 I just really don’t see the point to this “raising awareness” stuff. Surely, by now, people are generally aware of the existence of gay people. And as for “showing support,” I don’t really get how this supports anyone, it looks more like Municipal Virtue Signaling.