I was at the beach this weekend, and this is apparently what happened while I was out:

Friday: Why are crazy right-wing conspiracy nutcases still spreading these insane rumors that Hillary is sick.

Sunday: Hillary nearly passes out at a 9-11 Memorial Ceremony and has to be rushed off by her security detail. Despite a massive media presence, the only person to capture video of the barely conscious Democrat is an amateur with a video camera. Hillary’s people first spin that she got “overheated” on a 78 degree morning with a low humidity index. Hillary’s people quickly stage a photo op with a little girl in front of Chelsea’s apartment to prove she is completely, totally, 100% fine. (Right-Wing nut cases this was not actually Hillary, but a “body-double,” possibly an android-replicant built by the Clinton Foundation.) By evening, they have changed their spin again to claim that Hillary is suffering from “pneumonia.”  (So, is the little photo-op girl going to be checked, or…?)

Monday:  OMG, you guys, Hillary is totally a hero for bravely campaigning even though she’s totally sick with pneumonia .

Yeah, the next four years should be just filled with executive transparency and media honesty.

I semi-enjoyed the beach, if anyone cares.

Update:  One Obama crony is not impressed: “Antibiotics can take care of pneumonia. What’s the cure for an unhealthy penchant for privacy that repeatedly creates unnecessary problems?” – David Axelrod 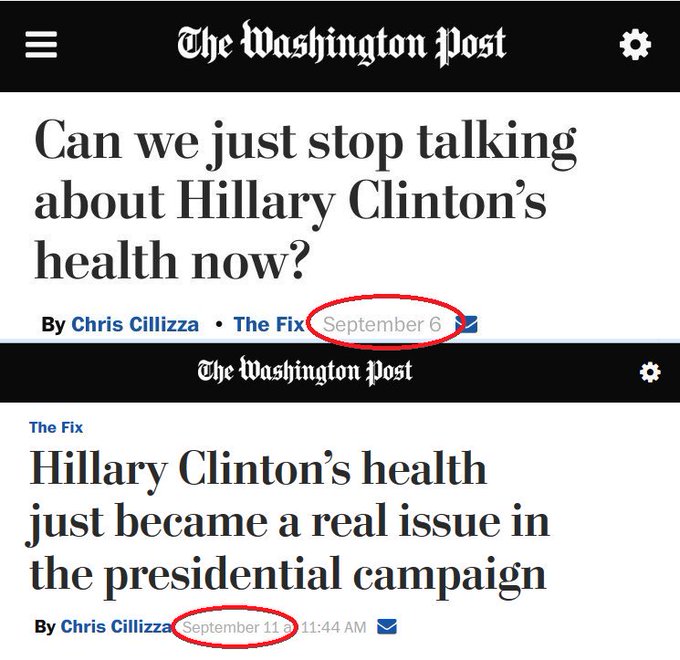