Back after the Orlando Disco Massacre, the Idiot Left was distributing this meme; being this stupid should hurt like a constant burning migraine, but unfortunately, it apparently feels like bliss. 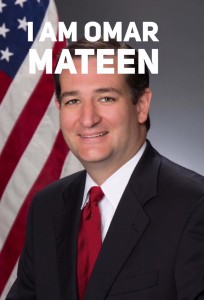 This was actually part of a series that included Sarah Palin, Donald Trump, Rush Limbaugh, Glenn Beck and a number of other figures on the right who have nothing in common … neither religion, nor party membership, nor philosophy … with Omar Mateen.