Certain gay people are so committed to victim politics that they carry Police chalk in their man-purses.  And to modern artist, nothing brings more approval than poking a stick into the eyes of people with traditional morals and virtues.

So, when an artist in France decided to create, as the centerpiece of his Christmas display, an inflatable tree that looked awfully much like a giant Fire Island Party Favor, he succeeded in causing offense to the sort of people hip artists love to offend; the sort of people who think a sex toy has no place as the centerpiece of a Christmas display.

And, of course, the gay community gets to pretend that this is all about “anti-gay bigotry.”  “Oh, the hatred! I feel so victimized! Give me a Cosmo and a tax subsidy.”

Anyway…  check out the picture and tell me the artist wasn’t trying to poke people in the eye with this. 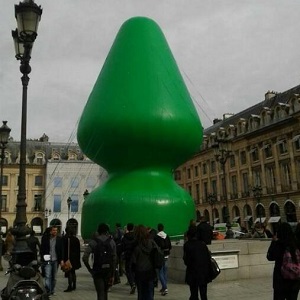