These adoring Democrat Press Operatives in Hillary’s campaign plane (“Broomstick One”) are now the unhappiest people in America. You are free to enjoy your schadenfreude. 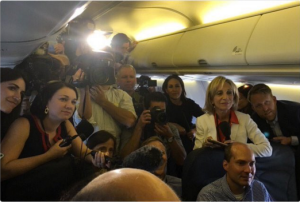 Twitchy has some pics of miserable Hillary supporters. I mean, you can feel sorry for them, but just remember, they’ve spent the last year calling you “racist, sexist, xenophobic, privileged, know-nothing, Islamophobic, homophobic, uneducated” and every other name in the book. And if she had won, they would be high-fiving each other and reveling in your defeat.

Here’s a few more: And Hillary didn’t even have the class to come out and speak to them. Nasty woman, indeed.

On that note: Sally Kohn is a miserable woman today. Good.  I assume Dan Savage is throwing hissy fits, too, but since I’m blocked from his Twitter feed, I’ll just have to imagine it.

My parting thought is to enjoy your schedanefreude from a distance; direct it at the fawning press that was in the tank for Hillary from Day 1 and for her most obnoxious supporters. If you know people who are disappointed today, give them some space for a while. They will need it.

Update: John McCain, Lindsey Graham, Chuck Schumer, and Pocahontas Warren all have to address Donald Trump as “Mr. President.” Just try and not be happy about that.

Update: The leftist ladies of The View have uber-sadfeels this morning.

Update: Last night, as the Blue Wall crumbled, Rachel Maddow looked like she had been pepper-sprayed.

Update: America, Wonkette is very, very cross with you.

I’m still kind of blown away by the elaborate set-up the Clinton people had for the victory party she didn’t have. How much Wall Street Donor Money do you think went into this thing?